Great Changes During a Great Lent

“Show me your ways, LORD, teach me your paths.

Guide me in your truth and teach me,

for you are God my Savior, and my hope is in you all day long. 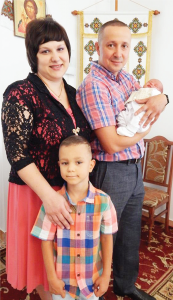 After a busy night as a district policeman on call, I hoped for some rest in the morning, but I got one last call—from an American couple. There were few foreigners and almost no Americans in our town at that time. Some hooligan threw a rock through their bedroom window and it sounded like this needed attention right away. My buddy and I showed up, and they were real Americans, not just temporary tourists! They lived here, and not for amusement! They were running a big-time charitable organization and spoke with flawless American accents! This was a Godsend to my wife who needed experience credits for her translation degree. I got their business card and after an interview with Mr. and Mrs. Nicholas and Kerry Laper, my wife, Nadiya, began unpaid volunteer work at Gift of Life. This happened on St. Patrick’s Day, twelve years ago.

After more years of police work, I was laid off. Someone had to stay at home on paternity leave taking care of our prematurely born son, and Nadiya went back to work. It was a very difficult time for us. But Gift of Life was more than a job for my wife. It was her calling, her mission, and it became a large part of our family’s life. Three years ago (again in March), Nadiya and I attended very interesting Bible studies held at Gift of Life by a Lutheran pastor. We were already members of a popular traditional church in Ukraine, but had more questions than answers as to what we believed in. Those Bible Studies were what we needed at that moment. They helped us discover that we were Lutherans inside. 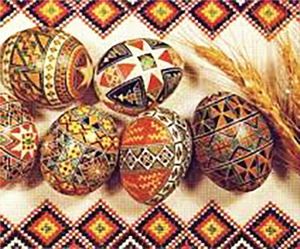 This month two years ago, I started to work at Gift of Life as an administrative assistant and my wife continued working as a manager (now she is on maternity leave with our second baby). Twelve years ago, neither of us could have imagined where we would be now or that we would even work together. The hooligan who broke that window was never identified, however we at Gift of Life like to joke that it was an angel! Following the chain of events, one can see that nothing is just a coincidence. Some people may call it destiny, or karma. We Christians believe that it is God’s providence.
Usually Easter is celebrated in April, so March is often Lent. It is amazing to think how our family changed from March 2008 to March 2020. We grew in faith together and together became members of the Ukrainian Lutheran Church. Now we both know why fasting during Lent, Advent or any other time is indeed a fine outward custom, but does not earn anything from God; how one can confess his sins directly to God any time; can receive Holy Communion as often as one attends church (rather than once a year, traditionally before Easter); that during Lent, as well as every day, we can thank God for sending His only Son, Jesus, to earth to pay for our sins; and that we can pray and talk to our God whenever we want and that He is loving, forgiving and merciful rather than stern and punishing as we used to believe. During these years we became parents and now our children are growing up with these concepts being taught so they can discern between traditions set up by people and the truth of God’s Word.

Our future remains to be seen but we don’t fear the unknown. To our God the unknown is already part of the plan. He is our true Lord, our Father, our Savior and Redeemer. Moreover, He is Risen! He is Risen Indeed! Happy Easter, dear brothers and sisters in Christ!