“The More Things Change, The More They Stay the Same”

As the rain and snow come down from heaven and do not return to it without watering the earth…so is my word that goes out from my mouth: It will not return to me empty, but will accomplish what I desire and achieve the purpose for which I sent it.” Isaiah 55:10-11

Some things never change. This is sometimes said in a negative way, even with disgust. You’ve heard it. Maybe you’ve said it. On the other hand, some things do change—for the better.
Twenty-five years ago, if the trans- Atlantic cables were up and running, it cost almost four dollars per minute to telephone from Malawi, Africa to the United States. Conversations were fast and short. A couple hundred years ago a letter could take months, even years to reach its destination. By that time the recipient (or sender) could be deceased. Now we communicate almost instantly for pennies per minute through the internet. Still, miscommunications occur with freakish frequency.

The family checkbook is almost a thing of the past, as people, especially millennial, use their cell phone apps to pay for almost anything. Paying with cash, like gold in days past, is becoming obsolete. My grandchildren think it’s “cool” that we use old fashioned paper dollars. In the United States, online, same day delivery of merchandise is replacing shopping malls. Yet, one must be careful to protect identity, or it can be stolen. Some have had trouble balancing their budgets; now easy credit can cause serious financial problems. Here in Ukraine, oligarchs have stolen billions through complex banking schemes, leaving a poor country even poorer. Weren’t all those changes supposed to make everything better? Those who believe material progress will lead to moral progress are hopelessly naive optimists. A hundred and sixty years ago, one could believe that life had arisen by chance. Now, through science, we know that the simplest cell is more complex than an entire city. It is harder to see life as a mere coincidence or accident. But facts don’t always change minds. Most scientists, rather than believing God’s word, rationalize outlandish theories trying to prove the unprovable. Evolution is taught in public schools while the hills shout: creation. The more things change, the more sinners rationalize their sin and unbelief.

At the time of Roe vs. Wade, most people thought an aborted “fetus” was a blob of evolving cells rather than a developing human being. Today, however, with ultrasounds and in utero color photography, we know what most people thought was actually a devilish lie. Mark Twain said, “A lie will get around the world before the truth can get its boots on.” The more things change, the more they stay the same. It seems that there are two kinds of people, those who will accept the truth and those who won’t. It doesn’t matter how many proofs are given to support the truth; willful sinners will rationalize their sins away. “Change and decay in all around I see; O thou who changest not, abide with me!” (Hymn 588, Christian Worship) The more things change… Yes, things change, but God’s Word remains the same. During our lifetimes we learn that His word is infallible and does not change. 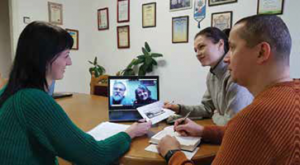 But some things do change, such as communications and the nature of financial transactions. Some of these changes have made the mission of Gift of Life highly effective. Time is not an unlimited commodity. Let’s spend it in heartfelt prayer, praise and thanksgiving. Please pray for each other and that the gospel is preached to all people. Praise God from whom all blessings come, especially, the blessing of our Savior Jesus Christ. Give thanks to the Almighty who has prepared good works for us to do. We know that God’s word goes forth as we speak it. All this changes things—for the better!