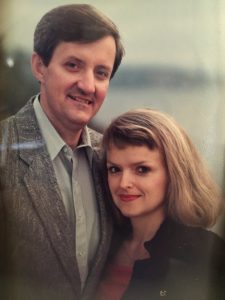 A Younger Brucee and Tania Petersen

My name is Tania. I am the child of immigrants from the Ukraine. My parents arrived in the United States in 1951.  They were blessed with Christian sponsors who welcomed them in Mississippi.  Their sea journey from Germany to America was long and harrowing but did not compare to their life during World War II.

As a young girl of 12, my Mother suffered and endured the unimaginable man-made, famine (Holodomor) in the Ukraine from 1932-1933 witnessing many children and other family members and friends perish of starvation.  She left her small village outside of Kyiv to go to the “big city” hoping for a better life.  There she provided a doctor’s family child care and domestic help. She related that she slept on a cot in the doctor’s office recalling that rats running over her at night.

My Father was an incredibly faithful, intelligent, kind and noble man whose Mother died at an early age and he was left motherless and lonely.  As a young man of 16 he was placed in a military academy to be trained as a military leader for the war.  His entire youth was spent fighting in a number of war theaters and suffering many serious wounds both physical and emotional.  Emaciated and barely alive, he was in a Prison Camp as the Americans liberated it in 1945. His strong faith in Jesus Christ sustained him. The memories of the horrors of war never left him.

My parents met and married in Munich, Germany in 1946. They were both temporary truck drivers for the US Army and planned to immigrate to Australia with two little ones in tow.  Their US Army friends strongly advised them to come to the US and arranged passage and sponsors for them. They arrived in Mississippi and picked cotton to survive.  Due to the “snakes and heat” according to my Father, they decided to come to Minnesota where the climate was more familiar and they had friends who immigrated shortly before them.

My parents raised five children in the Minneapolis area never taking any welfare assistance. My Mother and Father nurtured a large garden which was our main subsistence. Of course each of us had our garden duties daily.  Every Sunday we attended our Ukrainian Orthodox church to praise and thank God. I recall each Monday morning there were five envelopes containing our weekly lunch money so we could all have a “hot lunch” each day.  We were all taught the value of faith, family, and sharing.

My Father helped many Ukrainian immigrants find jobs, housing and even coached them for their driver’s license tests.  Many wanted their last resting place close to them. They all now rest in peace in the same cemetery. My parents were welcomed into the arms of Jesus at the ages of 91 and 90.  They were incredible role models and examples to all.

We now face another horrible war in the Ukraine.  God calls us to do what we can to help the Ukrainian innocents enduring its terrors.  If we can help and support not only those who remain in the country but also those who may be immigrating to America, we can be assured that God will bless us and our nation with faithful, hard-working individuals and families to grow the Kingdom of God and the United States of America.

Hebrews 13:8 Jesus is the same yesterday, today and forever 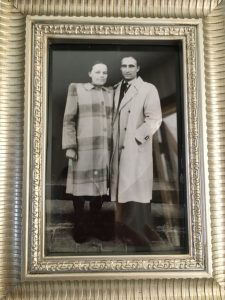 
Back to all stories