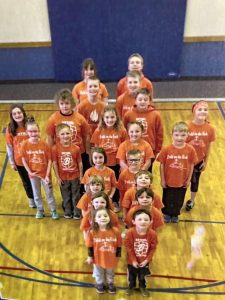 “Dobryden!” and “Khrystos voskres! Voistynu voskres” were new greetings uttered in the halls of Bethel Lutheran School in Sioux Falls, South Dakota. These Ukrainian phrases for “Hello” and the traditional “Christ has Risen” Easter greeting, along with the signature sky blue and yellow colors of the Ukrainian flag were among lessons learned by the grades K-8 boys and girls.

For their third quarter mission offering, the students collected offerings for school supplies for Ukrainian children served by the Gift of Life program. Shortly into the quarter, however, the lessons changed. Following the Russian invasion of Ukraine, words like “war,” “tanks,” and “refugees” were introduced, as well as prayers for the safety of the people of Ukraine. Within days, Bethel kids prayed personally for their child counterparts in western Ukraine and learned that God hears our prayer, as updates reassured them their new-found friends were okay.

“They look just like us!” – another observation by the Bethel kids when they saw a photo of Ukrainian children gathered at the mobile clinics. Yes! Especially in the eyes of God!


Back to all stories